See-now, buy-now is the customer demand pushing more and more fashion houses to join Burberry, Ralph Lauren and Tommy Hilfiger in selling straight from the catwalk.

And high-end jewelry is experiencing that same desire for all-but-instant gratification.

When the Swiss art jeweler Suzanne Syz introduced her latest collection in January during haute couture week in Paris, she said she was stunned by the speed at which guests bought the diamond ribbon rings and aluminum earrings accented with diamonds that she had brought as display pieces.

Usually, her guests would place orders and then wait the three months it takes her atelier to fulfil the requests. And in November, when Amrapali began selling its Indian-inspired designs on Net-a-Porter, the ruby and diamond drop earrings sold out in an hour despite the 28,340-pound ($34,770) price.

“More women are buying jewelry for themselves,” said Nicolas Bos, the chief executive of Van Cleef & Arpels. “They buy jewelry like they buy fashion, so are more spontaneous now.”

The shift in buying has changed the design process, too, said Anna Hu, a Taiwanese jeweler based in New York. “Clients want pieces much quicker than ever before,” she said. “My usual way of designing from A to Z takes a year, so it is impossible to do in the three months that new, younger clients are demanding now."

“So I go to my archive and start from D to Z,” she said, “so I can meet client demand, still be unique with stones or color combinations, and I don’t compromise.”

Ms. Hu, whose East-meets-West designs have won fans like Natalie Portman and Madonna, added that the pressure actually has helped her 10-year-old business. 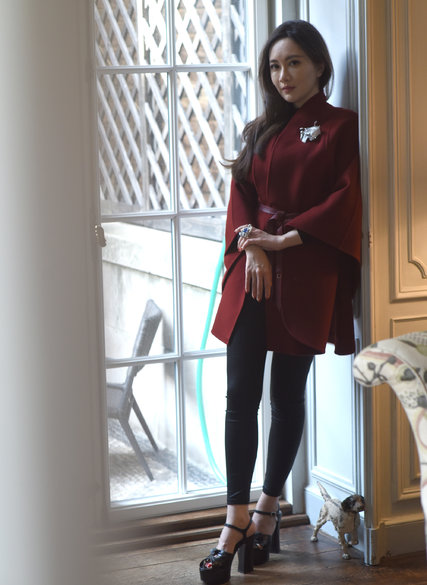 “With clients paying me 50 percent on a quicker delivery as well as 50 percent deposit,” she said, “this see-now, buy-now trend is giving me a much healthier cash flow so I’m now on a much better financial platform.”

She plans to bring in a business partner as chief executive later this year to, she said, “manage the bigger and faster demand so I can be an artist, as the speed I’m working at now gives me less time to experiment.”

Hamdi Chatti, vice president for Louis Vuitton jewelry and watches, said the company’s approach to training its sales staff also has changed. “We can send messages digitally every day instead of inviting them to a big learning session every year, so they can answer customer queries quicker,” he said.

Market response also arrives faster, Mr. Bos of Van Cleef & Arpels said. “Within three months following the launch, we get immediate feedback from clients such as what sells, where, and what their expectations are, which drives future evolutions,” he said. “It’s information that in the old days we would have gathered in a couple of years but now we can immediately feed into the creative process.”

Designers are having to become more savvy about their online presence, as younger buyers shop online and attention spans are shorter than ever before. “We have to be clear and communicate well,” said Temple St. Clair, a New York-based jeweler whose collections encompass high, fine and haute couture jewelry.

Even the men’s jewelry market is seeing change — although men have always bought jewelry faster than women, said Stephen Webster, the London jeweler who in July is opening a men’s boutique in Harrods, the first of its kind in the department store. “There is no phoning anyone else as there is with women,” Mr. Webster said. “They say ‘I want that,’ and are the most loyal clients ever.”

Yet there are challenges to adopting a see-now, buy-now approach. “It’s more costly and time consuming,” the New York-based jeweler Monique Péan said. For the first time, she made her latest collection immediately available when it was unveiled in February.

“Now we need to lengthen sourcing and production timelines by a few months in order to produce additional pieces to all come out at the same time, rather than spaced out,” she said. “And I had to employ a larger production team than I had in the past to dedicate more time to make sure we’re on schedule.”

As the consumers’ time frames shorten, jewelers from big brands to independents confront the possibilities of being left with unsold stock or not having produced enough pieces of an item that suddenly becomes hot. “We make an educated guess,” Mr. Webster said, “as no one in jewelry could cover every possible scenario.”

Some jewelers are adopting what they hope are clever strategies to slow down the see-now, buy-now demand. Wallace Chan, whose virtuoso pieces can take as long as six years to make, likes to invite potential buyers to his Hong Kong atelier so that he can explain his process.

He does show his jewels at events like the European Fine Art Fair (Tefaf), held earlier this month in the Netherlands, but they are loans from collectors so, he said, “I can explain my work and tell my stories rather than sell.”

Some small, independent jewelers say it is easier for them to react to the buy-now trend than it is for big brands. Ms. Syz, who runs a company of 10, including herself and six artisans, said she can shift production in two days. “We can do little things rapidly as we don’t need to crank out lots of similar merchandise to fill shops from Beijing to Monte Carlo,” she said.

Yet Mr. Chatti noted that for the last five years the Vuitton high jewelry collections have been available for delivery within three days of their debuts, and core collections have been available within a week. “It’s crucial in today’s competitive jewelry industry,” he said, as “an idea doesn’t remain confidential for long.” He added that the house has held three-day events for clients in which the jewelry is displayed on the first day and, by dinner on the last evening, guests are wearing the pieces they have bought.

The demand will be for even faster delivery in the future, Ms. Hu said. “Everyone is going to want a piece of beautiful jewelry at a younger age than they used to,” she said. “And in half the time, as nobody is going to want to wait.”