If you took all the gemstones used in Bibi van der Velden’s Galaxy collection and listed them, you’d imagine that combining every one into a single piece would result in utter chaos – and you would be right.

But happily, in the hands of this uber-artistic Dutch designer, that chaos is of the beautiful kind. 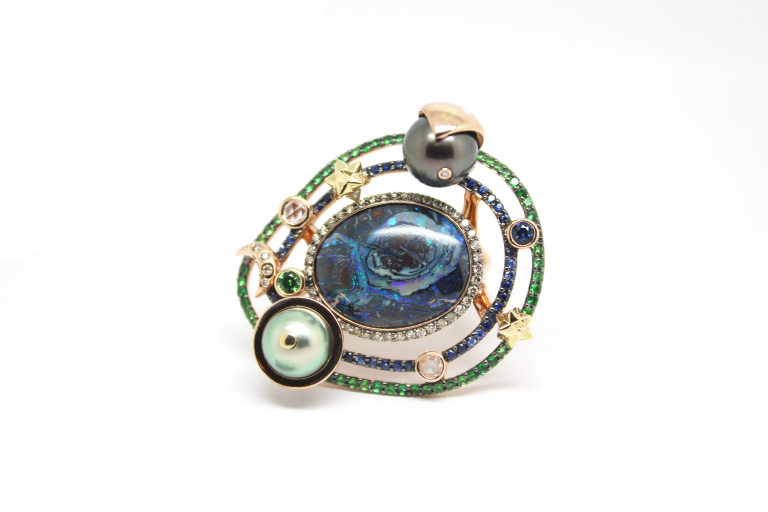 Van der Velden’s Galaxy collection takes boulder opals, Tahitian pearls in greys and greens, diamonds, sapphires, bright green tsavorites, and blue tourmalines, and spins them out into a range of pieces which are at times serenely celestial, at others verging on fantastical.

Take a pair of drop earrings featuring a pair of dark Tahitian pearls spinning in their own rose gold haloes. Suspended from delicately linked celestial symbols – a lightning bolt, stars, and delicate ovals of opal, topped by diamond-scattered studs in the form of a mismatched moon and star, they’re simple enough to be considered elegant, but detailed enough to demand a second look.

A huge cocktail ring from the collection, however, can only be described as a miniature galaxy for the hand. Centered on a large boulder opal, which Van der Velden herself describes as having “the same amazing colors found in the blackened sky, with the Milky Way hidden in its form”, the piece comes complete with its own trio of rings – one of diamonds, one of sapphires, and the last of tsavorites – around which revolve moons and stars of diamonds and coloured stones, and a pair of pearls in pistachio green and black, one of which spins in its own hemisphere of gold.

There seems to be no rule as to how the materials are set here – rather, they’re united by their organic forms and a colour palette of black, blue, and green. The masterpiece of the collection is a necklace which incorporates all the aforementioned elements, and more.

There is a puddle-like baroque pearl scattered with its own constellation of tiny diamonds, black pearls studded with rose gold stars and diamond moons, and a large chunk of labradorite carved into a pyramid. All these elements are interspersed with diamonds and blue tourmalines, and sometimes haloed with rings of pastel-coloured sapphires.

“With my galaxy collection I tried to make the un-graspable universe tangible,” the designer explains. “It’s an intergalactic fantasy. Every time I look at my pieces I dream away to a new and adventurous future, thinking of what is out there… just like l used to do when l was a child looking at the sky.” Available at Auverture.com